Hello again, Poetry Lovers. There, there! Settle down now! Tonight we are lucky to have the talented and amazing poet Greg Freeman as our guest, who will be talking to us.

Now, come on, folks. Lets sit back down and welcome our lovely guest Greg Freeman!!

Greg, welcome. So glad you could come tonight. And what a lovely frilled shirt! Wouldn’t we die for one of those, ladies and gentlemen!

Hmm… I’m not too sure! The frills flap about a bit. But they say they’re the way to go……

On a guy like you Greg, any trend can work….

spontaneous applause from the audience

The host signals for quiet – the audience meekly obeys and our guest looks apprehensive Host leans forward and places her angle lamp so it shines soley on our guest…..

Yes, Greg. You should be afraid……It’s down to brass tacks now.

Tell me when poetry became a part of your life……..

Well, Heather, for two years between the ages of 16 and 18 – the years 1969 – 1971 – I wrote bad poetry furiously, inspired principally by and in imitation of the Mersey poets, Adrian Henri, Roger McGough, and Brian Patten. I didn’t write any more poetry until 2004, when we were asked to come up with something in a creative writing class, and that way of stringing words together and seeing what happened came back to me. I wrote a poem full of longing and nostalgia for the north of England, where I’d lived for 5 years in the late 70’s – early ’80s. Poetry has been a big part of my life ever since that day, in that creative writing class in New Haw library.

Fascinating, Greg. ’69 to ’71 – bloody good years, them! And those wonderful Mersey boys, so strong!

Which contemporary poets do you admire?

I really rate Matthew Paul – and that’s not just because he’s a regular reader at Write Out Loud Woking, and said some very nice things about our open-mic nights in your last interview! Matthew and I come from very much the same neck of the woods, and attended schools in Kingston across the road from each other – at different times, I hasten to add. His poetry is witty, crafted, and humane, and hopefully once he gets a second collection out many more people will start taking him very seriously as a poet of stature. Other than Matthew, I admire far too many other poets to list individually. It wouldn’t be right to single others out.

Oh, Matthew’s wonderful, isn’t he. Get that second collection out now, Matthew!

Tell us about founding the prolific website Write Out Loud

I must put you straight there, Heather. Starting up Write Out Loud wasn’t down to me at all, but two chaps in Bolton around 2003 – Julian Jordon and Dave Morgan. Originally it was just a round-robin email listing where local open-mics were being held, but it was developed into a website – first the Gig Guide, sadly in abeyance at the moment because of Covid. Then came news, reviews, and the blogs, where anyone can post a poem, and others comment on it. A number of open-mic nights were launched in the north-west region that bore the name Write Out Loud…first Bolton, then Wigan, Stockport, Middleton, Marsden, and finally Woking, down in Surrey.

I joined the site in late 2009, just posting poems to begin with, and found it a welcoming community of poets. But at some point I must have let it slip that I was a journalist, and in 2011 I began doing news items for the site, when I was still working as a newspaper sub-editor. I took redundancy from the paper in 2012, and began working for Write Out Loud ‘full-time’, as it were, writing news stories and reviews, taking pictures, you name it. All unpaid, of course!

Julian remains the man in overall charge of the website, which is now a Community Interest Company, or CIC. We look on ourselves as a poetry hub, disseminating information, encouraging poetry in all its forms. Right now, we are just finishing staging a big competition called Beyond the Storm in aid of NHS Charities, for which we had over 2,300 entries. According to our stats, we get around 25,000 visitors to the site each month.

Well, I thank fate for that amazing website, as that was how we met. I mistakenly posted an event for Poetry at the Adelaide for 3 evenings the same week!

Thankfully, you contacted me about it, then you came along to the Adelaide and …… well, the rest is history.

Now, you’ve had a pamphlet published by Indigo Dreams called Trainspotters. A stunning and very personal collection. My own favourite is Dance On. What is yours?

Do you know, I believe that Dance On is my favourite too. It was intended to be a short story, and became a poem instead. It came first in an annual local poetry competition run by Kingston University, in 2007. My only such success!

In the competition anthology it said: “The poem demonstrates how culture provides disguises that can be dangerous to our own individuality, yet the superbly balanced poignancy and humour allow readers to recognise such absurdity and laugh at it.” Is that how you saw it, Heather?

I did! I related to that bitter-sweet tale, and its poignancy engulfed me. Beautiful piece. That’s great! I didn’t know it was a winner too!

Tell us the best poetry gig you’ve done so far – then the worst!

I think my best and worst gigs were one and the same – on the concourse at Kidderminster railway station, home of the Severn Valley heritage railway, as part of the Worcestershire literature festival. A group of us were billed as the Steam Poets, reading poems about railways throughout the day. Unfortunately only one chap had bought a festival ticket to listen to us, and he grew increasingly browned off as many of my poetry comrades – not obsessive railway enthusiasts like myself – quickly ran out of steam, as it were, and of train poems, and were reduced to recycling ones they had performed earlier in the session. I, on the other hand, had an inexhaustable supply. Then one of our number, a resourceful chap, Bert Flitcroft, had the idea of rounding up coachloads of pensioners who had arrived to catch a train, and persuaded them to sit and listen to us while they waited to get on board. At last we had a proper audience. The day was accompanied by whistles blowing, smoke, and the letting off of much steam. It was a marvelous place to read poetry, and as far as I know, was never repeated. The sort of poetry event that would have been closed down by Beeching.

Love it, Greg. Great story! I can see several potential poems about that day! And they look an impressive lot!

You and Rodney Wood seem to have a great rapport co-hosting Write Out Loud Woking. How did you two meet?

Rodney may not remember this, but we first encountered each other at the open-mic nights at The Boileroom in Guildford, which preceded Janice and Donall’s monthly poetry events. Pre-2010, certainly. I was immediately struck and was very impressed by the size of Rodney’s hat.

Subsequently we were regular open-micers in Guildford with Donall and Janice at the Bar Des Arts before Rodney took over the reins at Woking Stanza group. For a long time I had wanted to see an open-mic night in my home town in Woking. But it was an equally long time before it dawned on me that if I wanted to see it happen……Thanks to Rodney’s determined prompting, the two of us finally got it up and running, first for two years at the New Inn at Send, and since then at the Lightbox art gallery in Woking. Until lockdown, that is. Right now we’re Zooming! 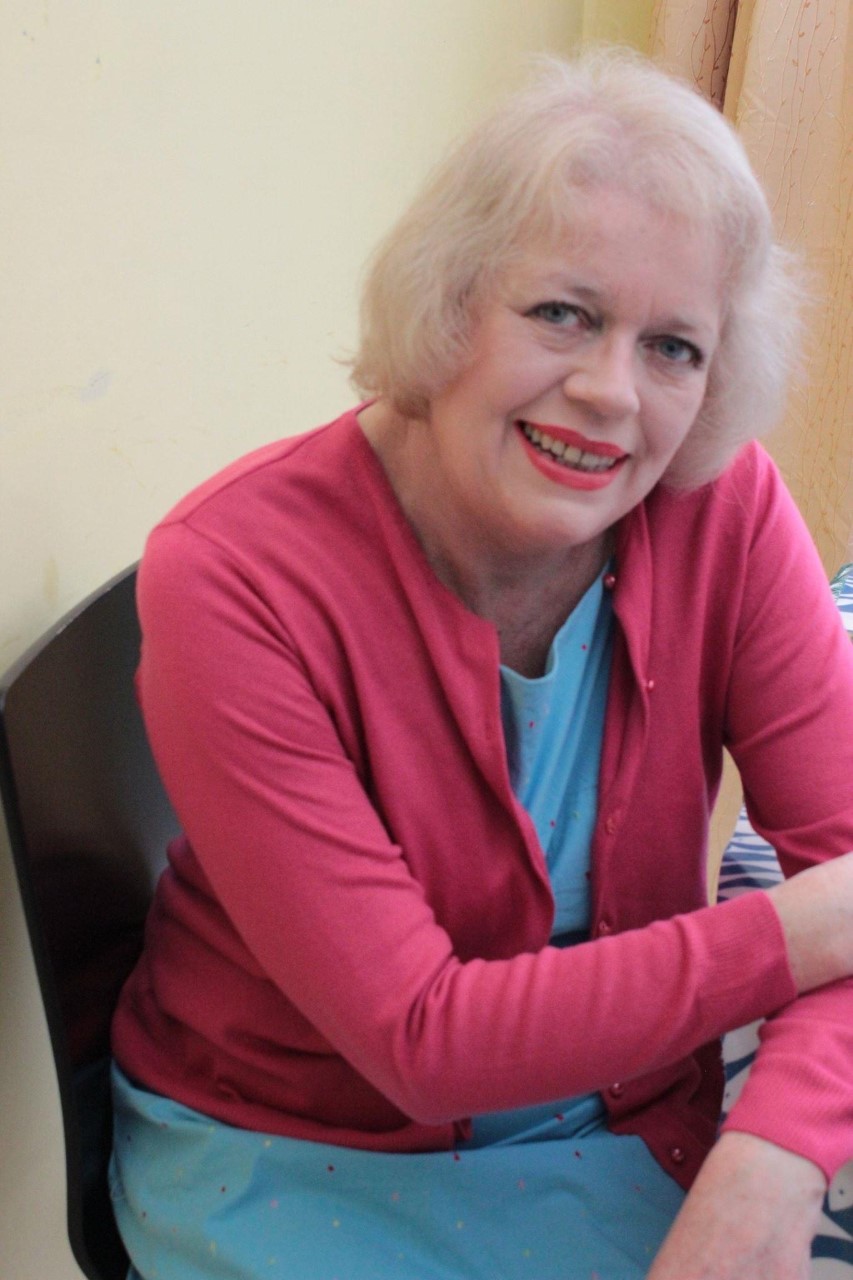 You’ve come a long way from admiring that hat! Yes, I remember going to the New Inn for the first time. Early 2018, I think. What a remarkable story!

Great interview, Greg. Thank you so much. Now, are you up for the discotheque later? Paper Lace and Candlewick Green had a real set-to last week, the Police had to be called! It was brilliant!

Actually, Heather, the last time I went there, I got mobbed! They mistook me for Bobby Crush!

Well, I warned you about that hairstyle and velvet jacket! Stop reading that Style column in The Guardian!

Audience go mad, Greg has to be smuggled out the building

To find out more about Write Out Loud click